Kuzhalmannam Ramakrishnan is a percussionist, innovator, organizer, teacher, fusion programmer, lyricist, music director etc. In this COVID lockdown period, Kuzhalmannam Ramakrishnan, who is a renowned musician, a multi-talented personality from south India had given relief to many persons across the globe through the music and his creativity.

He is a Guinness World Record holder, popularly known by his birthplace Kuzhalmannam. He is one such person who could achieve mystical heights through Perseverance and Commitment where others could never imagine about. He is primarily a south Indian classical percussion instrument player, however, his multi-talents in various art forms, singing painting, drawing, lyrical writing, music composing, acting and art direction make him a unique personality among others.

Since March 2020, he has been releasing light music songs named SULALITHAM, which is a lockdown series of songs written and composed by him. He makes other talents around the world involved in the series which gives exposure to many during this difficult situation, which is a big relief to the artists. Sulalitham is completing its 500 episodes in August 2021.

Through YouTube channel, “Centre of Music & Arts” and other social media sites, his creations are enjoyed by millions of diversified audiences. It adds more joy that he himself does the presenting, editing, recording and publishing through his mobile phone with limited capabilities. However, the quality of the music or its video were never compromised.

He has been Mridangam in charge for a nonstop continuous 37 years for the grand music festival of Kerala, the Chembai Music Festival. Last year in 2020, due to the restrictions, Music Festival has confined to a single day event. But, in order to keep the saga continued, he had organized online music festival for 15 days through his YouTube channel, which had given great opportunity to the Carnatic fraternity from different parts of the country to participate and perform.

In addition, he could also give free Mridangam classes and his Guinness world record experiences which was uploaded through his YouTube channel as 250 episodes. Thus, he could be a strong pillar to many in this difficult time of pandemic by spreading the core Indian Culture of music experience.

His experiments on the traditionally used wooden Mridangam, to a more natural friendly (non wooden), weight less and easily dismountable Mridangam is a classic example of commitment to the Music. The instrument is called Sadh Mridangam, for which he had received patent from Government of India in Jan 2016. In 2004, he made a record by continuous performance of 36 hours long, in 2005, he himself crossed the limit by performing continuously for 101 hours and again in 2008, he challenged the record by continuous playing of 301 hours. As part of the musical therapy treatment experiment, he did a Rhythm Therapy of continuous performance of 501 hours in 21 days is still a never breakable attempt, which is yet another feather on his cap.


Significant Contribution of the Applicant

Contribution to the field

Contribution to the Society 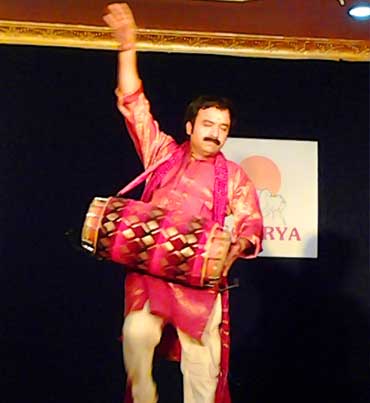 
After a period of Eight years of research, in 2013, he has innovated a weightless instrument similar to Mridangam named ‘Mridu’, which is meant to be played in fusion as well as in solo performances (Mridu Tharang). The unique instrument is an Electrified Percussion instrument which filters the noises and gains the sound purity which enables the live performance more audible and enjoyable to the audience. And is well appreciated by the public in India and abroad during the world tour of Soorya India Festival, International Trade Fair @ New Delhi, etc.. 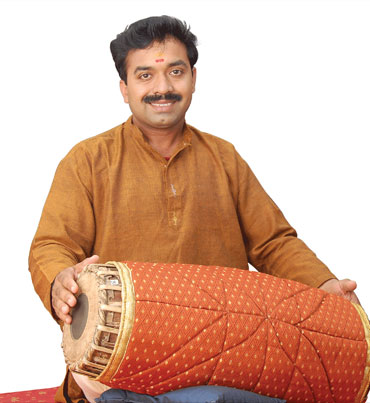 Dr. Kuzhalmannam Ramakrishnan is a phenomenon in the field of percussion instrument of South India. He is the one and only artist in the world, performed more than 500 hours...

His stage performances begun at the age of 10 and continues with dedication for the past 3 decades. In his artistic career he has been accompanied with well renowned veteran artists,..

Dr. Kuzhalmannam Ramakrishnan is also a well known painter, more than 50 oil paintings painted, most of them are related to music. The works like “Madhuvanthi”,“72 Ragas”,”35 Thaalas”,National Integrity,etc.